I want to tell you the story of two Rhodes Scholars. One is named William Jefferson Clinton. He went to Georgetown University on scholarship, Oxford on the Rhodes Scholarship, and Yale Law School. He served as the 40th and 42nd Governor of Arkansas and before that was Arkansas’ Attorney General. He married Hillary Rodham Clinton, also a grad of Yale Law School and US Senator from New York, Secretary of State, and Democratic candidate for President. In 1992, Clinton became President of the United States and in 1996 the first Democrat since Franklin D. Roosevelt to be elected to a second term. Whatever one thinks of his personal life, he was an effective leader of a powerful country; he left office with the highest end-of-office approval rating since WWII. Fame and fortune, a life that served and influenced a country and in fact the world. Not bad for a kid from the hicks, son of a traveling salesman who abandoned his family soon after his son’s birth.

The other Rhodes Scholar has no name, and I cannot tell you his history, because I do not know it. After he won the Rhodes and got his degree from Oxford he became a priest, and went to serve a poor inner-city church. He served that parish for 40 years. When after many years he ran into my father again, they talked about what they’d been doing with their lives. “I guess, for a Rhodes Scholar, I’m a bit of a failure” the inner-city priest said. One small poor church all my life. On the contrary, my father said. In the eyes of the world, it is true; against the Bill Clintons, his life does not compare. He has no fame or beauty that we should admire him; certainly not a Wikipedia page. But he is the one who is living Jesus’ words.

If any want to come after me, to walk with me and be my disciples, let them deny themselves and take up their cross and follow me (Matt 16:24).

Peter, first among Jesus’ disciples, doesn’t like this one bit. God forbid, Lord! he says, as Jesus tells them for the first time that he is walking towards the cross. God forbid. This shall certainly never happen to you!

What is at issue here is not just the death of Jesus. It is Peter’s whole future, his hopes…and his hopes are hopes of glory. Remember, Peter has just named Jesus “The Christ.” “You are the Messiah,” Peter has said just 4 verses before, “The Son of the living God.” And Jesus says, “Blessed are you, Simon son of Jonah…You are Peter, and on this rock I will build my church.” “Blessed are you Peter. I will give you the keys of the kingdom of heaven.”

And then Jesus says, “We are going to Jerusalem, and the plan is that I am going to suffer a great deal at the hands of the people who matter, and then I am going to be killed” (Matt 16:21).

Oh—and there’s more. It is not going to be a noble death. No battle scars on my chest. It’s going to be whip-marks on my back, and a slave’s cross. He had no form or beauty that we should admire him. No one who is anyone will want to have anything to do with this Jesus called the Christ.

Not even Peter, as it turns out. “I don’t know the man,” Peter will say, as Jesus is on his way to the cross.

Peter loves Jesus. But he denies Jesus’ cross. And this, Jesus says, you cannot do. If you love me, you must follow me. You must take up your cross too. Because Jesus IS his cross.

Matthew tells the story of Peter with great sympathy. When the cock crows the third time, when Peter has yet again denied the Lord he loves in face of the cross, Peter goes out and weeps, and he weeps, Matthew alone tells us, “bitterly.”

Matthew tells the story of Peter with sympathy, because he knows that Peter is like us. We want to love Jesus—more than anything we want to love him. But to love Jesus is to love his cross. And this is a hard thing to do. We are right there with Peter, naming Jesus as the Christ. We are right there with Peter, looking forward to a throne. It is Bill Clinton we admire, and all the stars of Hollywood. We call them “stars” after all! We would agree with the Rhodes Scholar whose name is unknown. His life doesn’t amount to much, in that poor and struggling parish. Better to be a bishop, at least. Certainly that is what most bishops think.

We are people of such privilege, and we believe that privilege and a name, fortune and fame, are a good thing. We hope for a throne. And this is simply human.

But this is not what Jesus says. And note: Jesus doesn’t just say, “No, Peter, you’re wrong.” To Peter who says “God forbid!” to the cross, Jesus says, “Get behind me, Satan!”  Satan. To refuse the cross that is Christ’s, to prefer the life that seeks a throne—this is not just neutral. It is demonic. These good things of the world, powers and privileges, presidencies and episcopacies, wealth, relative or absolute and the endless pursuit of pleasures it makes possible…these are not just neutral. Where there is no cross there is no Christ, and in the pursuit of our privileges and pleasures we are lost to God.

The sound of the cherubim lost to our ears.

Cormac McCarthy sees in our self-absorption, the interminable seeking of our own pleasure and profit, the death of the world. “Treading the dead world under like rats on a wheel” (The Road, 273). And he is right. 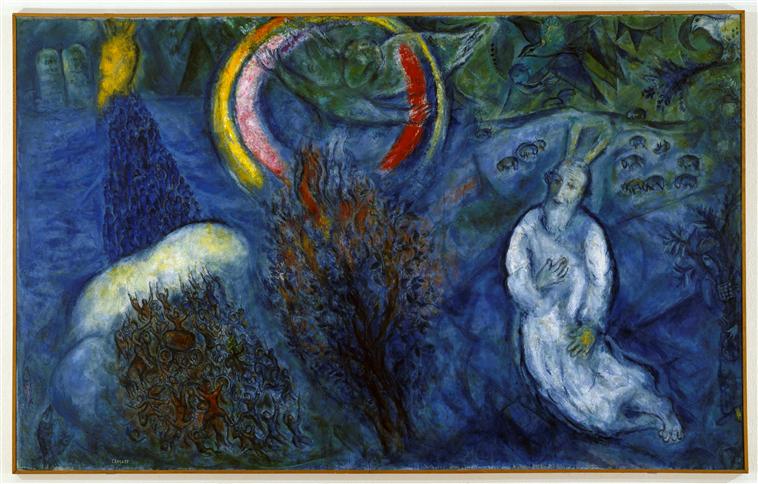 This is God’s word to Moses from the burning bush in the time of Israel’s bondage. This is God’s word to us from the cross of Christ, in a world, in a church in flames. “I am the God of Abraham, Isaac and Jacob,” God says. “This is my name forever.” I am with you, even when you are not with me. The cross is the sign of our turning away, how far we will go in turning away, turning from God to ourselves and our own fortune. Nail to the cross the one who tells us our pursuit of our own privilege is demonic. Nail him to the cross. The cross is the sign of how far we will go in our desire for a throne. It is darkness at noon, over the world.

And it is also the sun. It is the Son, rising in, rising over the darkened noon, holding God’s faithfulness in his hands. The cross is God with us when we are not with him, suffering the destruction we have worked, lifting us out of our darkness into a new life with him.

It is a life that has the shape of the cross. It is the only way, in a world in the grip of sin, drowning in its own debris. If we would love God, if we would try to speak God’s love in this world as it is, the cross is the only way. It is the necessary shape of our lives. The priest with no name in that inner-city parish, spending all his life, his great gifts, his Rhodes scholarship and Oxford degree, pouring out his life with and for these few poor people: here the cross rises. Here the Son rises, Jesus shining in these unsung lives.

So lift it up! Stand up for Jesus. Lift up your cross, and sing.